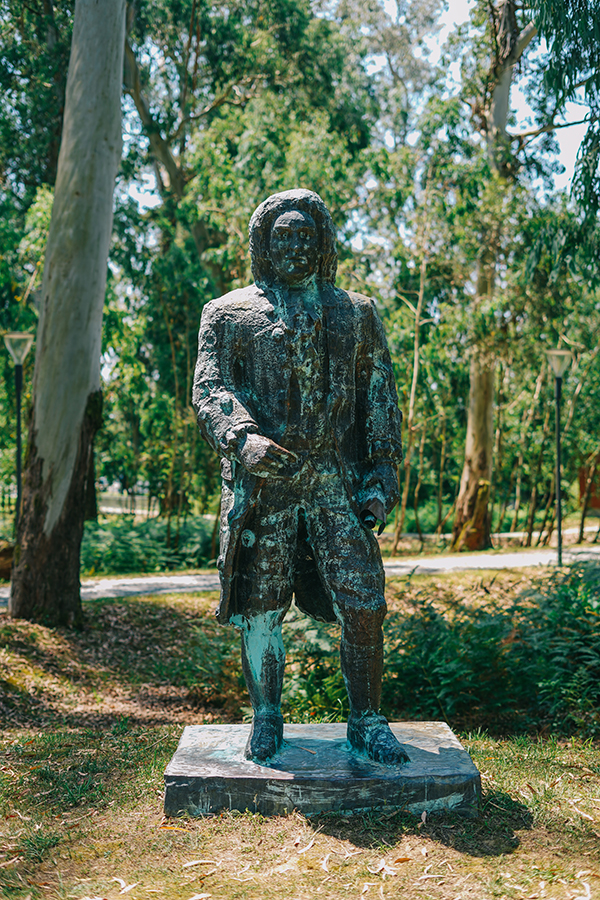 Johann Sebastian Bach was better known as a virtuoso organist than as a composer in his day. His sacred music, organ and choral works, and other instrumental music had an enthusiasm and seeming freedom that concealed immense rigor. Bach's use of counterpoint was brilliant and innovative, and the immense complexities of his compositional style -- which often included religious and numerological symbols that seem to fit perfectly together in a profound puzzle of special codes -- still amaze musicians today. Many consider him the greatest composer of all time.
Bach was born in Eisenach in 1685. He was taught to play the violin and harpsichord by his father, Johann Ambrosius, a court trumpeter in the service of the Duke of Eisenach. Young Johann was not yet ten when his father died, leaving him orphaned. He was taken in by his recently married oldest brother, Johann Christoph, who lived in Ohrdruf. Because of his excellent singing voice, Bach attained a position at the Michaelis monastery at Lüneberg in 1700. His voice changed a short while later, but he stayed on as an instrumentalist. After taking a short-lived post in Weimar in 1703 as a violinist, Bach became organist at the Neue Kirche in Arnstadt (1703-1707). His relationship with the church council was tenuous as the young musician often shirked his responsibilities, preferring to practice the organ. One account describes a four-month leave granted Bach, to travel to Lubeck where he would familiarize himself with the music of Dietrich Buxtehude. He returned to Arnstadt long after he was expected and much to the dismay of the council. He then briefly served at St. Blasius in Mühlhausen as organist, beginning in June 1707, and married his cousin, Maria Barbara Bach, that fall. Bach composed his famous Toccata and Fugue in D minor (BWV 565) and his first cantatas while in Mühlhausen, but quickly outgrew the musical resources of the town. He next took a post for the Duke of Sachsen-Weimar in 1708, serving as court organist and playing in the orchestra, eventually becoming its leader in 1714. He wrote many organ compositions during this period, including his Orgel-Büchlein. Owing to politics between the Duke and his officials, Bach left Weimar and secured a post in December 1717 as Kapellmeister at Cöthen. In 1720, Bach's wife suddenly died, leaving him with four children (three others had died in infancy). A short while later, he met his second wife, soprano Anna Magdalena Wilcke, whom he married in December 1721. She would bear 13 children, though only five would survive childhood. The six Brandenburg Concertos (BWV 1046-51), among many other secular works, date from his Cöthen years. Bach became Kantor of the Thomas School in Leipzig in May 1723 and held the post until his death. It was in Leipzig that he composed the bulk of his religious and secular cantatas. Bach eventually became dissatisfied with this post, not only because of its meager financial rewards, but also because of onerous duties and inadequate facilities. Thus, he took on other projects, chief among which was the directorship of the city's Collegium Musicum, an ensemble of professional and amateur musicians who gave weekly concerts, in 1729. He also became music director at the Dresden Court in 1736, in the service of Frederick Augustus II; though his duties were vague and apparently few, they allowed him freedom to compose what he wanted. Bach began making trips to Berlin in the 1740s, not least because his son Carl Philipp Emanuel served as a court musician there. In May 1747, the composer was warmly received by King Frederick II of Prussia, for whom he wrote the gloriously abstruse Musical Offering (). Among Bach's last works was his 1749 Mass in B minor. Besieged by diabetes, he died on July 28, 1750.
×
Congratulations
You Have Collected Shell