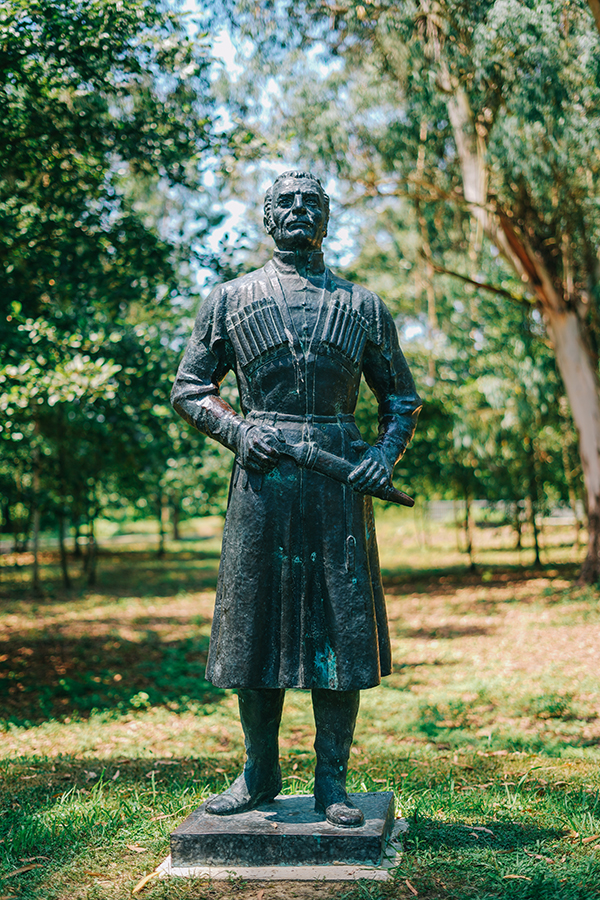 As singer Hamlet Gonashvili, recognized as Voice of Georgia, was born in 1928 in Sighnagi district. His special musical talent was discovered during his theatrical studies with Rector Mikheil Kveselava, who advised Hamlet to become interested in singing on a professional level. In 1953 Hamlet Gonashvili became the leading soloist of the Georgian Song and Dance State Ensemble, and in 1969 he joined the State Song and Dance Ensemble “Rustavi”. “The ensemble's” repertoire was often based on Hamlet's character as his unique voice and virtuoso performance technique always attracted special attention. He performed both Kartli-Kakhetian and Imereti-Gurian songs and hymns, Megrelian and Abkhazian Sogs (as a narrator), and works of Georgian compositors with the great success. Along with the ensemble Rustavi, Hamlet Gonashvili traveled almost all over the world and left no one indifferent to his song including professional musicians who could not hide their admiration for the Georgian singer's abilities. "Urmuli", "Orovela", "Tsintskaro", "Tsmindao Ghmerto" (Holy God), "Gaprindi Shavo Mertskhalo", "Daigvianes" are the most prominent from his work. The Georgian singer had a perfect ability of melody articulation that was well used by a composer Iakob Bobokhidze when he chose Hamlet Gonashvili's voice for his works (''Modi Giambob", "Tovli", "Mzeo Tibatvisa").

On the on hand, Gonashvili's work is closely related to folklore, and on the other hand, it is a kind of synthesis of the aesthetic ideals of classical music of Georgian and Western European music. His songs are becoming more and more popular abroad - foreigners use Hamlet Gonashvili's "Urmuli" and "Orovela" for films and mass scenes as a mystical event, in other words as a unique expression of the ability of human voice.