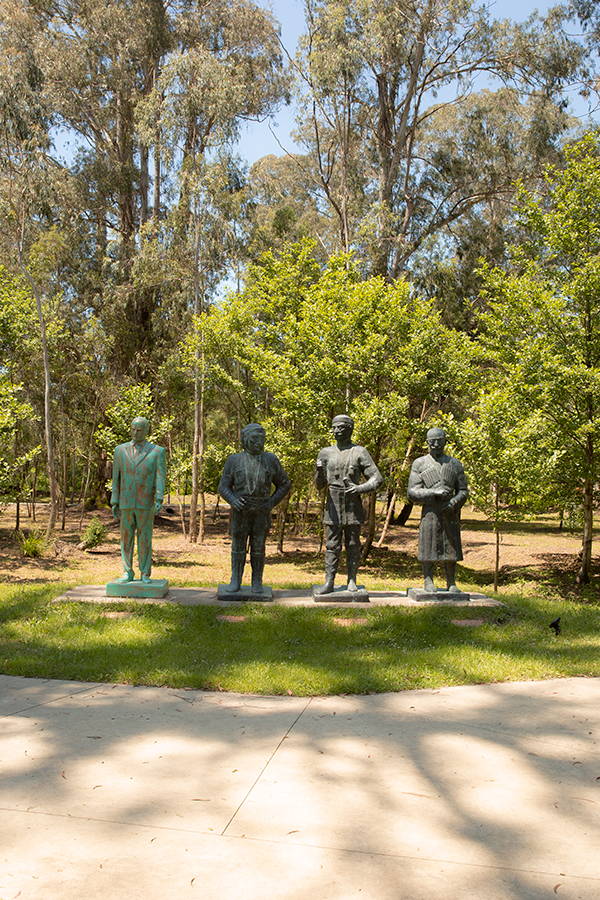 Vano Mtchedlishvili, Samuel Chavleishvili, Sandro Kavsadze and Dzuku Lolua were Georgian singers and folklorists, who made the greatest contribution to the preservation of Georgian folklore.

Ivane (Vano) Mtchedlishvili was Georgian singer and choirmaster. Born in 1903 in the village of Kakabeti of Sagarejo district. His singing talent was discovered at an early age and as it is known, he is especially distinguished for his easy mastering of difficult songs of west Georgia, particularly Gurian ones. Thanks to such great abilities, he had had the choir of singers since childhood, that developed him even more.

In 1923. he created an ensemble of young singers in the village of Kakabeti, which laid the foundation for his work as a choirmaster. A few years later, Vano Mtchedlishvili along with his choir performed successfully in the Second Republican Olympiad of Georgia, which was soon followed by a trip to Moscow and Leningrad together with Mikho Jighauri to record music discs. In the following years, Georgian choirmaster performed Georgian songs with great success at the Republican Olympiads along with different Georgian ensembles.

The role of Vano Mtchedlishvili, in the collection and restoration of Georgian songs, is worth noting. In fact, his enthusiasm saved such pearls of Georgian culture as "Chakrulo", "Garekakhuri Mravalzhamieri", "Shemodzakhili", "Turfani Skhedan Chardakhsa", "Shen, bicho, Anagurelo"; Vano is also considered to be an outstanding teacher, whose students were many famous singers, including Hamlet Gonashvili.

Samuel Chavleishvili, one of the founders of the Gurian Music School, was born in 1857 in the Ozurgeti district. He was the first to start organizing public musical events along with Beso Intskirveli, Ilarion Chavleishvili and Ladiko Dolidze, which made great contribution to the popularization of Gurian songs. It is noteworthy, that he held concerts in Tbilisi, Chiatura, Zugdidi, Kutaisi, Batumi and Poti as well. He often collaborated with Dzuku Lolua, Sandro and Mikheil Kavsadze, composer Kote Potskhverishvili - It was on the initiative of this latter that in 1917 Samuel Chavleishvili held a wonderful concert in Tbilisi, which even attracted the attention of Zakaria Paliashvili. The famous performer, the founder of choirs and the famous choirmaster of Georgian folk songs is mentioned as “Gurian Nightingale”.

Sandro Kavsadze was a Georgian self-taught singer born in 1874 in Kaspi municipality. while studying at Gori Spiritual Seminary, he was singing in S.Goglichidze'e choir. Later he became a soloist (tenor) in Lado Aghniashvili's choir. Sandro Kavsadze is recognized as a master in singing Georgian folk songs, especially “Urmuli” and “Orovela”. In 1911 he moved to Chiatura, where he worked for 24 years and leaded singing choruses. He has educated many choirmasters including M. Kavsadze, V. Khatelishvili, S. Gvelesiani. It is noteworthy, that in 1935 he founded the State Ensemble of Folk and Dance of Eastern Georgia  in Tbilisi, comprising 100 people.

Dzuku Lolua was a singer and a tutor born in Khobi municipality. He left many Megrelian songs for future generations.  since 1911 he has worked in Sokhumi where he started developing choral arts. In the repertoire of a choir formed by him, particular attention was paid to Megrelian songs as well as Abkhazian ones which he gathered village by village, recorded on a phonograph and learned. On September 25, 1904 the choir held the first concert successfully and created one more powerful hub for Georgian culture in Abkhazia. In 1914 the choir toured in west Georgian cities. After the successful performance at the anniversary of a great poet Akaki Tsereteli, Dzuku Lolua's choir was invited in Tbilisi where he significantly affected the audience. In 1921 he was appointed as an instructor of west Georgian folk choirs. He worked on 100 Megrelian and other regional songs that he established in the repertoire. For his great work he is called ,,the Patriarch of Megrelian Songs". After his death the choir of west Georgian singers, already known worldwide, was named “Dzuku Lolua Choir of West Georgian Folk Songs”.