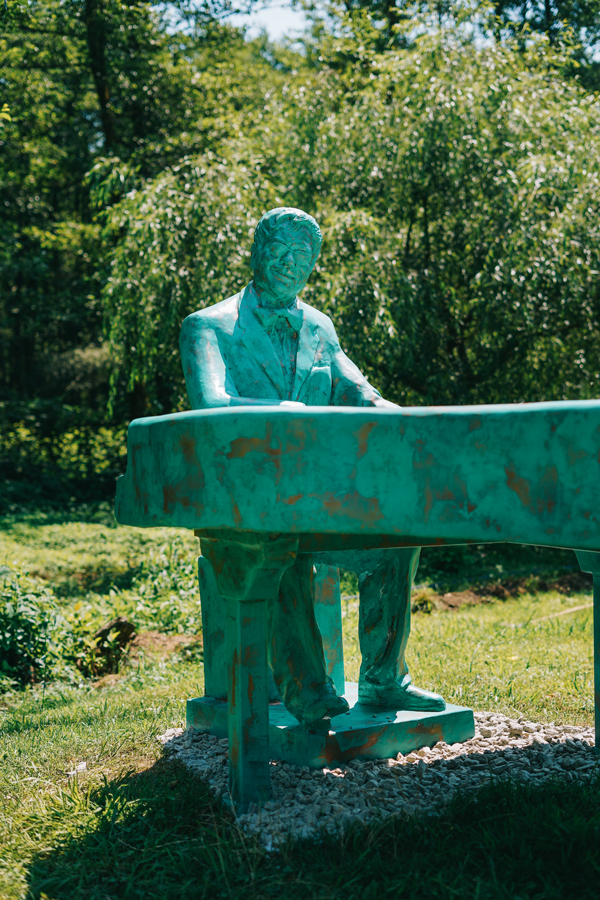 Elton John was the biggest pop star of the '70s, grabbing headlines and generating hits throughout the world. As it turned out, this was merely the first act in a remarkable career that kept him at the top of the charts for decades. He charted a Top 40 hit single every year between 1970 and 1996, a sign that he knew how to both change with the times, and mold the times to fit him. Initially marketed as a singer/songwriter, John soon revealed he could also craft Beatles-like pop and pound out rockers with equal aplomb. He dipped into soul, disco, and country, as well as classic pop balladry, progressive rock, and even musical theater.
The son of a former Royal Air Force trumpeter, John was born Reginald Kenneth Dwight in 1947. He began playing piano at the age of four, and when he was 11, he won a scholarship to the Royal Academy of Music. After studying for six years, he left school with the intention of breaking into the music business. In 1961, he joined his first band, Bluesology, and divided his time between playing with the group, giving solo concerts at a local hotel, and running errands for a London publishing house.
By the summer of 1968, he had begun recording singles for release under his own name. Usually, these songs were more rock- and radio-oriented than the tunes he and Taupin were giving to other vocalists, yet neither of his early singles for Philips, "I've Been Loving You Too Long" and "Lady Samantha," sold well. In June of 1969, he released his debut album for DJM, Empty Sky, which received fair reviews, but no sales. For his second album, John and Taupin hired producer Gus Dudgeon and arranger Paul Buckmaster, who contributed grandiose string charts to Elton John. Released in the summer of 1970, Elton John made inroads in America, where it appeared on MCA's Uni subsidiary. In 1971, he released the live 11-17-70 and the Friends soundtrack, before releasing Madman Across the Water late in the year. Madman Across the Water was successful, but John achieved stardom with the follow-up, 1972's Honky Chateau. Recorded with his touring band -- bassist Dee Murray, drummer Nigel Olsson, and guitarist Davey Johnstone -- and featuring the hit singles "Rocket Man" and "Honky Cat," Honky Chateau became his first American number one album, spending five weeks at the top of the charts.
Between 1972 and 1976, John and Taupin's hitmaking machine was virtually unstoppable. "Rocket Man" began a four-year streak of 16 Top 20 hits in a row; out of those 16 -- including "Crocodile Rock," "Daniel," "Bennie and the Jets," "The Bitch Is Back," and "Philadelphia Freedom" -- only one, the FM hit "Saturday Night's Alright for Fighting," failed to reach the Top Ten. Throughout the mid-'70s, John's concerts were enormously popular, as were his singles and albums, and he continued to record and perform at a rapid pace until 1976. That year, he revealed in an interview in Rolling Stone that he was bisexual; he would later admit that the confession was a compromise, since he was afraid to reveal that he was homosexual. Many fans reacted negatively to John's bisexuality, and his audience began to shrink somewhat in the late '70s. The decline in his record sales was also due to his exhaustion.
His versatility, combined with his effortless melodic skills, dynamic charisma, and flamboyant stage shows, became his calling cards; many of his songs -- including "Your Song," "Rocket Man," "Goodbye Yellow Brick Road," and "Don't Let the Sun Go Down on Me" -- became contemporary pop standards.
Black Sea Arena had the honor to host Elton John under the  “Wonderful Crazy Night" Tour in 2018.
×
Congratulations
You Have Collected Star