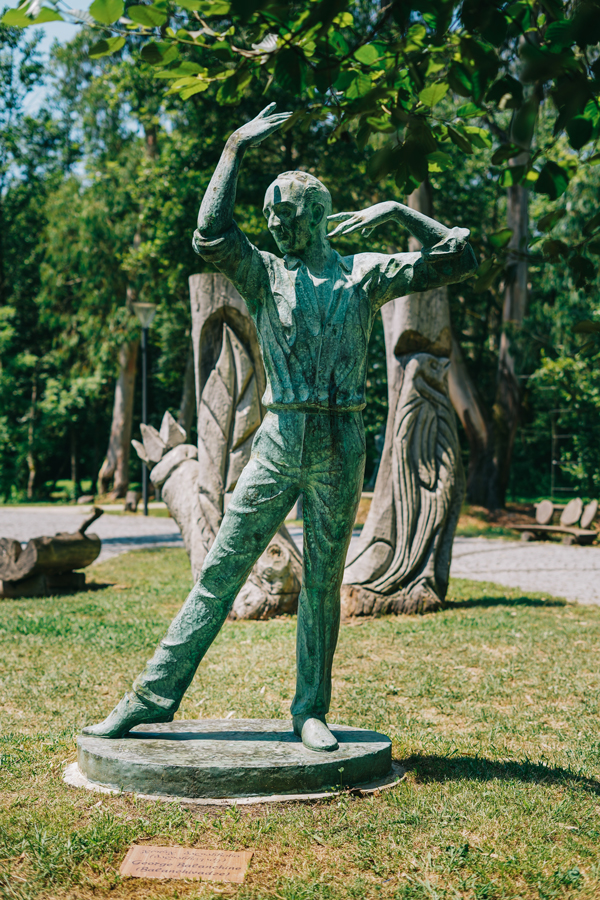 George balanchine is regarded as the foremost contemporary choreographer in the world of ballet. The son of a composer, Balanchine early in life gained a knowledge of music that far exceeds that of most of his fellow choreographers. He began studying the piano at the age of five and following his graduation in 1921, from the Imperial Ballet School (the St. Petersburg academy where he had started his dance studies at the age of nine), he enrolled in the state's Conservatory of Music, where he studied piano and musical theory, including composition, harmony and counterpoint, for three years. Balanchine's style has been described as neoclassic, a reaction to the Romantic anti-classicism, (which had turned into exaggerated theatricality) that was the prevailing style in Russian and European ballet when he had begun to dance. As a choreographer, Balanchine generally de-emphasized plot in his ballets, preferring to let "dance be the star of the show," as he once told an interviewer. Nevertheless, tantalizing hints of story color works ranging from Agon to Liebeslieder Walzer, and such ballets as La Valse, Apollo, Scotch Symphony, La Sonnambula, Harlequinade and Prodigal Son — as well as the full-length Nutcracker, A Midsummer Night's Dream, and Coppelia — integrate the elements of dancing and narrative.
An authoritative catalogue of his works lists 465 works created by Balanchine in his lifetime, beginning with a pas de deux in 1920 (LA NUIT) and ending with a solo, Variations for Orchestra (though he had used the Stravinsky score for a 1966 ballet, this work was entirely re-choreographed), in 1982. In between he created a body of work as extensive as it is diverse, ranging from the expansive Symphony in C and the lavishly theatrical Orpheus to such small-scale gems as Pavane. Though it is for his ballet choreography that Balanchine is most noted, he also worked extensively in theater and movies. He choreographed numerous musical comedies, including On Your Toes, Cabin in the Sky, Babes in Arms, Where's Charly?, Song of Norway, I Married an Angel, The Boys from Syracuse, The Merry Widow and The Ziegfeld Follies of 1935 and his film credits include Star Spangled Rhythm, I Was an Adventuress and Goldwyn Follies. Balanchine also choreographed numerous opera-ballets throughout his career. He staged many of his ballets (or excerpts) for television, as well as creating works especially for the medium: in 1962 he collaborated with Stravinsky on the original television ballet, Noah and the Flood, and in 1981 redesigned his 1975 staging of L'enfant et les Sortileges to include a wide range of special effects, including animation. Through television medium, millions of people have been able to see the New York City Ballet in their own homes. "Choreography by Balanchine," a four-part "Dance in America" presentation on the PBS series "Great Performances" began in December 1977. Included on the programs have been The Four Temperaments, Tzigane, Prodigal Son, Allegro Brillante, and segments of Jewels and Ballo Della Regina. Balanchine travelled to Nashville with the Company for the video tapings in 1977 and 1978 and personally supervised every shot, in some cases revising steps or angles to be compatible with the camera. The series has been broadly applauded by critics and audiences all over the country and was nominated for an Emmy. In January 1978, the New York City Ballet participated in the acclaimed PBS series "Live from Lincoln Center" for the first time. Coppelia, choreographed by Balanchine and Alexandra Danilova in 1974, was seen live from the stage of the New York State Theater at Lincoln Center. This presentation also netted Balanchine an Emmy. The Company worked again with "Live from Lincoln Center" eight years later, this time performing Balanchine's A Midsummer Night's Dream.
×
Congratulations
You Have Collected Shell